The history of the Seven Sisters Colleges

Written by Support
Updated over a week ago

“We may be in the board room, but the CEO won’t get off his cell phone to hear our presentation.”*

To women readers, I hope you have not faced discrimination or intimidation from men, but, let’s face it;  it still goes on.

When universities first began in North America, women simply were not admitted to the elite colleges, including the Ivy League.   By the mid-1800’s, women began demanding a good education, and some men supported them.  “The plan and policy of this school recognizes the principle that in the present state of society in our country young women require the same thorough and rigid training as that afforded to young men,” wrote all-women’s Hollins University founder Charles Cocke in 1857.

Co-education was not yet the norm, and the history of women’s colleges is, indeed, a noble one.  Most think first of the Seven Sisters colleges, and although they were not consistently the first US colleges granting bachelor’s degrees to women, all were founded between 1837 and 1889, seeking to achieve the same Ivy League liberal arts education (think arts and sciences, or general education) as men.

1837:  Mount Holyoke really was one of the earliest, founded by chemist Mary Lyon as Mount Holyoke Seminary.  In the small town of South Hadley in central Massachusetts, Mt. H. is about 2 hours west of Boston, enrolls 2,300 undergraduate women, has one of the most beautiful college campuses, and continues to offer an equal-to-Ivy rigorous education, often attracting scholarly women interested in sciences and medicine.  Among many, noted alumnae include Elaine Chao, current U.S. Secretary of Transportation, and poet Emily Dickinson.  One parent, an M.D. herself, reminded me of Dr. Virginia Apgar, Class of 1929, who developed the test still in use for evaluating the health of newborns.

Nowadays, Mt. H. is part of the five-college consortium in the area that includes all-women Smith, the big state University of Massachusetts – Amherst, alternate-learning style Hampshire College, and elite formerly all-men Amherst College.  Women can take classes at any of the other colleges, and men from the other schools come to yours.

In 1865, Vassar came next, located in Poughkeepsie, NY, about 1 hour north of New York City.  However, when the all-men’s colleges began to accept women, Vassar decided it was only fair that they accept men.

In 1875, Wellesley College began admitting students.   Only a 20-minute train ride away from the glories of downtown Boston, truly the most wonderful place for students, the college sits on a high plateau over looking the rolling Wellesley Hills and on into Massachusetts.  Wellesley boasts two former U.S. Secretaries of State:  Hillary Rodham Clinton under Obama (she gave the graduation speech for her class 1968), and (Georgetown professor and author) Madeleine Albright under Bill Clinton.   Other notable alumnae include former NASA astronaut Pamela Melroy and Canadian economist Jalynn Rogers Bennett. Currently welcoming 2,300 women, Wellesley students enjoy exchange opportunities with nearby co-ed business school Babson College and Olin College of Engineering.

Also in 1875, Smith College opened its doors in central Massachusetts.  Now welcoming 2,750 students, Smith has resisted pressure to become co-ed.  Imagine being able to get a 4-year engineering degree in a program specifically for women while concurrently continuing your dance and music skills – for credit.  Smith is also a member of the five-college cooperation, and their town of Northampton is the liveliest in the area, full of activity, attracting students from the other campuses and folks all the way from Hartford coming in for an evening concert.   Their art museum alone is so amazing that young men choose Amherst, 7 miles’ distance, to be able to enjoy it.

Opening their doors in 1879 was Radcliffe College, then known as the Harvard Annex.  Nowadays, men and women undergraduates enroll in Harvard.

Bryn Mawr (meaning large hill in Welsh) College opened in 1885 in Pennsylvania as the women’s counterpart to nearby Haverford, then men-only.  Formerly Quaker, now non-denominational, both schools enjoy cross-registration as well with Swarthmore College and the University of Pennsylvania. Bryn Mawr was one of the first institutions to offer graduate degrees, including doctorates, to women.   The glories of Philadelphia are only a ½ hour SEPTA train ride away, and their most famous graduate is the late actor Kathrine Hepburn. I’ve always admired war correspondent alumna Martha Gellhorn.  In a college ranking in the ‘60’s Bryn Mawr ranked ahead of Harvard partially owing to their having the greatest percentage of Ph.D’s actually teaching undergraduates.  Many would agree with that evaluation today.

The most popular in the group is Barnard, founded in 1889, currently hosting 2,500 undergraduate women in New York City. Barnard has developed a unique relationship with Columbia, just across the street, whereat students can take any classes they want and obtain an Ivy League degree.  Those who allege that Barnard women couldn’t get offer from Columbia have never met any, for all, past and present, are eminent.  Famous ones include anthropologist and author Margaret Meade, homemaking TV star Martha Stewart, and author Zora Neale Hurston.

Make no mistake:  although not technically Ivy, these schools are all formidable and will offer you an equally fine or better undergraduate education.

Although Pembroke, the women’s college affiliated with Brown, and Douglass College, affiliated with Tulane, have folded into the larger universities, other schools have resisted the pressure.

I think of Sweet Briar in VA, not far from the University of Virginia, boasting graduate pioneering Toronto attorney Mary Lamont.  This school has implemented the second engineering program for women.  In Lynchburg is Hollins University, mentioned originally.  Also pre-eminent is Mills College in Oakland, CA, and if you like the idea of California plus other options right next door, Scripps College is part of the Claremont Consortium, coordinating with Harvey Mudd, Pomona, Claremont McKenna and Pitzer. It is totally glorious.

So why, with schools like Vassar, Chatham University, Wells College, Connecticut College and Mary Lyon’s Wheaton College bowing to pressure to admit men, have these other schools remained all women?

The reality is that not all men in positions of power recognize women as equal.  Putting us at a disadvantage is most often a smaller stature and higher, more-childlike voices, readily trivialized. How would a women’s college change that?  Receiving a top-flight education at a women’s college can give the support a woman needs to increase confidence and speak with authority to be able to compete on an equal footing with men.  All the resources of that school are directed towards women;  yes, there are men on the faculty, but they wouldn’t be there if they thought women were dopes – and if they did, they soon learn otherwise.  Your class president will be a woman; head of student council will be a woman;  you have role models and mentors to encourage and inspire you whom you will admire forever.

Though often 50% or more of law, business and medical school enrollment nowadays, women are still underrepresented in STEM, medical specialties and arguably areas that “require raw intellectual talent—a sort of talent that women are stereotyped to possess less of than men.” (See: www.frontiersin.org/articles/10.3389/fpsyg.2015.00235).

We still have a distance to go. 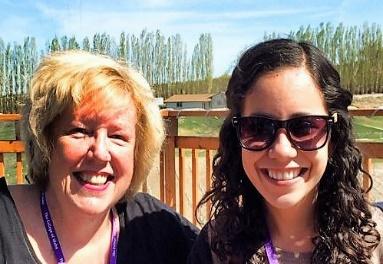 Two Smithies/guidance counselors meet joyfully by chance at the College of Idaho in Boise.  Ingrid Dávalos (right), originally from Paraguay, Smith Class of 2010, now at the United World College Maastricht International School in the Netherlands, can’t believe the rules in place in the early 1960’s.  You had a housemother?  What did she do?  (Kept the sign-out book). Men allowed in your room only once a year?  Ha ha!  Was that Valentine’s Day? (Yes, if you found one, but you had to keep the door open).

Nowadays, “in loco parentis” rules are gone, and affiliations and co-operations with co-ed colleges proliferate, so you’re not in boarding school or isolated in an ivory tower.

Did this answer your question?